The various propaganda and official news organs of the U.S. ruling class have been alive with triumphalist stories related, in one way or another, to the recent Ukrainian military offensive in the Kharkhov region. Ritter offers a different point of view in his analysis of that Ukrainian offensive and other events in Ukraine. He notes that the Russian Military defeated and largely destroyed the NATO trained and supplied Ukrainian Army, that had existed before the smoldering conficts in the Donbas region were augmented into a larger war by the Russian invasion in February of 2022. He noted that in the time since the original Ukrainian Military was largely destroyed by the Russian Army, that a new NATO designed military was built up. It is NATO led and lavishly NATO supplied, and while it has a majority contingent of Ukrainian soldiers, they are bolstered with, and led by, a large (around 20,000) contingent of International mercenaries and other far-right military types. The previous more-or-less indigenous Ukrainian military had been bolstered with International forces, but they were largely ineffectual couch potatoes, ideologues, and other middle aged types who supported the far-right Ukrainian Government (installed after the 2014 EuroMaidan Coup). The new International Legion is the cream of the crop of mercenaries and soldiers of fortune who have fought in a number of previous wars and terror campaigns in places like Central America and parts of Africa. They are the best combatants the Capitalist U.S.-led West has, and they have been massively committed to Ukraine. That commitment was supported by about $50 billion worth of the latest U.S. / NATO weapons.

Ritter pointed out that Russia has several other military commitments to flashpoints around the periphery of Russia and in places like Syria, so even though the Russian military has over 1 million members, it does not have many troops to spare. The Russian High Military Command made mistakes in the deployment of its forces, they were fooled by the Ukrainian feint towards Kherson, and they thinned out their forces in the Kharkhov area to send troops to Kherson. He also stated that he thinks the Russians were surprised at how willing the U.S. and NATO were to massively supply some of their finest weapons to the Ukrainian Coup Regime. Another issue is the question of war crimes and horrific crimes against ethnic Russians in Eastern Ukraine. The Azov Regiment forces, of whom several hundred were captured in the Mariupol Steel Factory and other places, committed a large number of crimes against the civilians of Mariupol, the Donbas, and other places in Eastern Ukraine. They filmed their crimes with their cell phones and a large number of those phones were captured by the Russian military. Russian military investigators have been interrogating those Azov prisoners to build war-crimes cases against them.  Ritter discussed, with Blumethal and Mate, the rocket attacks launched by the Russian and Ukrainian forces in the days before the September 16th interview. Ritter thought that the Ukrainian rocket barrage was intended to kill as many Azov Regiment prisoners as possible before complete war-crimes cases could be made against them.

Ritter was of the opinion that the Ukrainian Army had squandered the personnel and resources that had been built up over the past few weeks / months, in this recent offensive; for little or no advantage. He is of the opinion that the Russian military can train and equip enough troops to achieve what they feel they is necessary in Ukraine. The interview was conducted before the latest developments with Russian men leaving the country to avoid military service, and the latest round of Corporate Controlled, NPR / PBS, and most alternative media reporting on alleged Russian war-crimes and mass-graves. 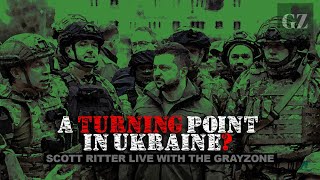