This article addresses the significant change that will presumably characterize the relationship between Florida Governor Ron DeSantis and President Biden and the Federal Government for at least a few days.  The article is fine as far as it goes, but it does not address some of the most salient issues (perhaps Paul Street will comment on the change in DeSantis public attitude in the wake of the Hurricane).  One issue that the authors do not discuss is the fact that an outsize amount of climate and weather related disasters have occurred in places that have seen massive amounts of population growth over the past 40 or 50 years.  Most specifically these are events that have occurred in Florida and the Southwestern U.S.  Both are regions where Americans, many of retirement age but working age people too, have moved to escape cold winters and depressed conditions in Northeastern and Great Lakes region states.  But the changes in climatic conditions caused by Global Warming have begun to overwhelm these areas.  Reservoirs in both California and the other states in the Colorado River Basin are at record low levels, and the worst drought in 1,500 years is changing the nature of the region.  In contrast, the Southeast, including Florida, has some occasional problems with drought, but mostly has problems with devastating storms.

Hurricanes and tropical storms, that had been unusually quiescent this year until Hurricane Fiona hit Puerto Rico about 11 days ago; have again come to public notice with a strong level 4 storm hitting Central Florida over the last few hours.  The relentless development and population growth in Florida (where 200 people per day move into the state, and population increased from 2.77 million in 1950 to over 22 million now) has created a situation in which hurricanes that hit the state inevitably cause widespread and expensive damage, and sometimes kill large numbers of residents.  The situation in Florida now, in the wake of the Hurrican Ian event, is relatively dire, a sheriff in the area where the hurricane made landfall stated this morning that:  "While I don't have confirmed numbers, I definitely know the fatalities are in the hundreds," Lee County Sheriff Carmine Marceno said on ABC-TV's Good Morning America. "There are thousands of people that are waiting to be rescued."

Pressed on the numbers, Marceno said "so far confirmed in the hundreds. Meaning that we are responding to events, drownings. Again, unsure of the exact details because we are just starting to scratch the surface on this assessment."  (See, "Tropical Storm Ian still pounding Florida in '500-year flooding event'; 2.6M without power: Live updates.", "Lee County sheriff fears 'hundreds' could be dead", Sep 29, 2022, John Bacon and Celina Tebor, <i>USA TODAY</i>, at <https://www.msn.com/en-us/news/us/hundreds-feared-dead-sheriff-says-2-6m-without-power-as-tropical-storm-ian-continues-to-wallop-florida-live-updates/ar-AA12nieD?rc=1&ocid=winp1taskbar&cvid=29353a8551484491f61a31cc4d438657>)

The U.S. promoted and encouraged population movement out of the original core industrial area of the U.S. in the Northeast, the Great Lakes, and the Midwest regions.  The Interstate Highways, the System of Dams and reservoirs built in the West, and massive Federal spending on weaponry and high-tech developments (including the space exploration programs) were lopsidedly spent on the South and the West.  The industries that were boosted by these expenditures including aerospace, computers, biotechnology, trucking, and agribusiness were again skewed to the Sunbelt and the West.  The question now is, can the U.S. continue to keep rebuilding the wreckage from hurricanes or can it afford to build the projects needed to maintain water supplies for places like Southern California, Arizona, and Nevada.  Some experts have already made estimates of about $285 Billion to rebuild the damage in Florida from this latest hurricane.  The cost of the drought in the West will be very high, over half of our fruits and nuts and a quarter of our fresh vegetables are grown in California alone. 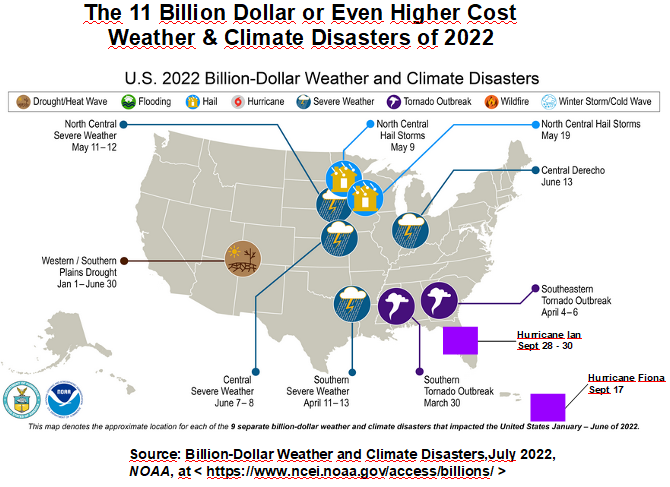 The New York Times article about DeSantis and his political tactics, as modified by the Hurricane appears here below.

As Winds Ravage His State, DeSantis Puts His Political Bomb-Throwing on Pause

As Florida's governor and a potential Republican candidate in 2024, Ron DeSantis has often attacked President Biden and Washington. But now his state will need federal help.

WASHINGTON -- As a powerful hurricane hammers Florida's Gulf Coast, Gov. Ron DeSantis of Florida is confronting a vastly different calculus in his dealings with President Biden and the federal government. 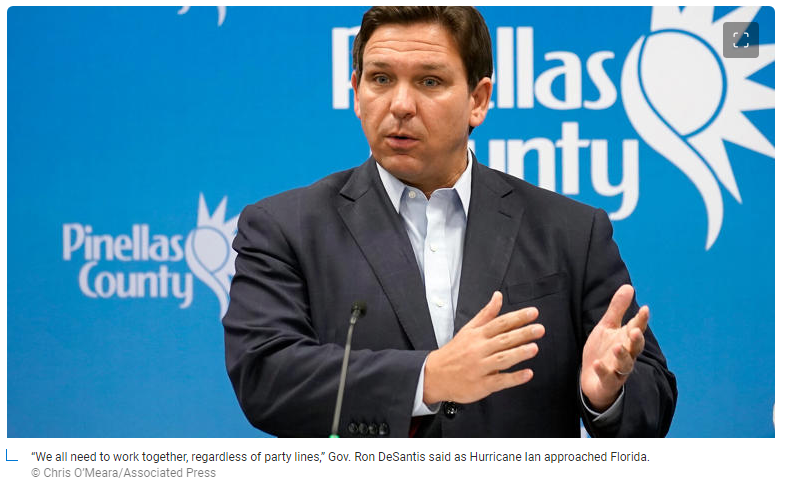 Mr. DeSantis, a Republican widely seen as holding White House ambitions, is one of his party's foremost political provocateurs, often appearing on national television to rail against an administration in Washington he denounces as overbearing. As recently as February, Mr. DeSantis dismissed Mr. Biden as someone who ''hates Florida,'' saying baselessly that he ''stiffs'' storm victims of relief for political reasons. 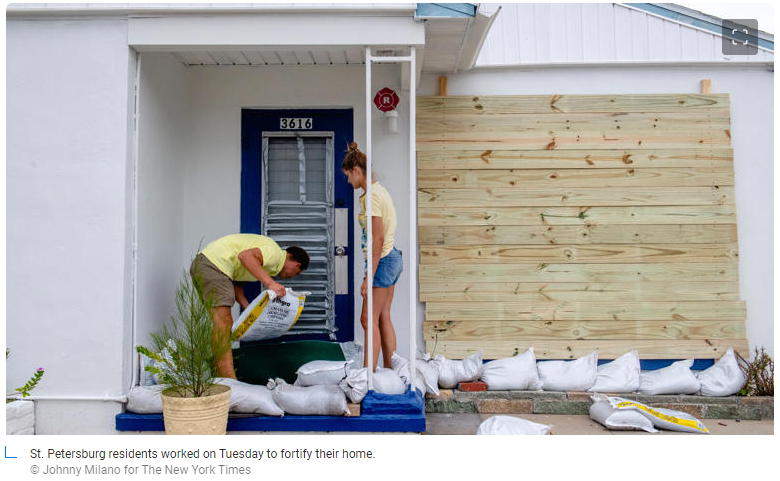 But now, as Hurricane Ian threatens to inflict significant damage across Florida, Mr. DeSantis must rely on assistance from the same federal government whose public health guidance he has ridiculed during the pandemic. Beyond that, he must work with the very president he has castigated and may soon run to replace. 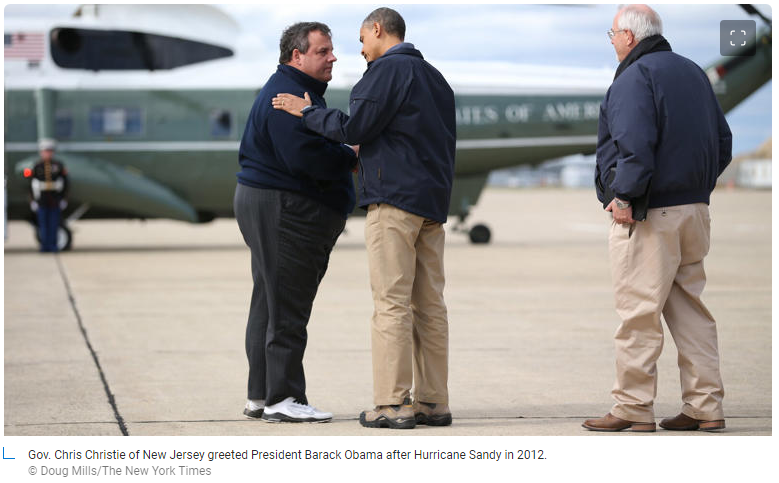 ''We all need to work together, regardless of party lines,'' Mr. DeSantis said on Fox News on Tuesday night, adding that he was ''thankful'' for the Biden administration's assistance. ''The administration wants to help,'' he said. ''They realize this is a really significant storm.''

At a briefing early Wednesday evening, Mr. DeSantis noted that he had spoken with the president the day before. ''He said all hands on deck, that he wants to be helpful,'' Mr. DeSantis said. ''He said whatever you need, ask us. He was inviting us to request support.'' Earlier, he praised help Florida had received from several federal agencies.

The disaster-driven pause in partisanship is a notable shift for Mr. DeSantis, a politician who came to power during a highly polarized social media era and won his 2018 primary thanks to an endorsement from Donald J. Trump that he earned after defending Mr. Trump scores of times on Fox News.

The governor's tenure has been characterized by a series of fights appealing to the Trump-aligned Republican base, particularly on social issues and the pandemic response. One question that immediately arose as the storm bore down on Florida was for how long Mr. DeSantis, who is seeking re-election in November against Representative Charlie Crist, a Democratic former governor, would put politics aside.

Mr. Biden, in contrast to Mr. DeSantis, has for decades sold himself as an across-the-aisle deal maker.

On Wednesday morning, the president made a point to announce that he had been in touch with Mr. DeSantis.

''My team has been in constant contact with him from the very beginning,'' he said at a White House conference on hunger.

Mr. Biden, who also spoke with several Florida mayors, said that he had told Mr. DeSantis that the federal government was ''alert and in action'' and that he had approved every request from Florida for federal help.

''I made it clear to the governor and the mayors that the federal government is ready to help in every single way possible,'' Mr. Biden said.

Ms. Jean-Pierre declined to say how long Mr. Biden and Mr. DeSantis spoke for on Tuesday.

Hurricane Ian is the first major storm to strike Florida since Mr. DeSantis took office in early 2019. He is operating with a storm playbook long honed by governors of Florida, where the state's response to Hurricane Andrew in 1992 was widely criticized as too slow and ineffective.

When he ran for president in 2016, Jeb Bush, a two-term governor, frequently highlighted Florida's hurricane preparedness and rebuilding efforts under his leadership. Mr. DeSantis's immediate predecessor, Rick Scott, burnished a somewhat awkward public persona while shepherding Florida through a series of hurricanes during his tenure.

Mr. DeSantis is unlikely to follow the path of Gov. Chris Christie of New Jersey, whose warm greeting for President Barack Obama during an October 2012 visit to inspect damage from Hurricane Sandy drew scorn from fellow Republicans during his subsequent presidential campaign.

Mr. Christie said in an interview on Wednesday that, 10 years later, ''I wouldn't change a thing.'' He went on, ''To me it always was that the job that I've been elected to do was the most important thing and the politics at the time was secondary.''

He added: ''I didn't think there was anything else to it at all. That's a decision that Governor DeSantis is going to have to make.''

At the Conservative Political Action Conference in February, Mr. DeSantis said Mr. Biden ''hates Florida'' and ''stiffs'' storm victims because of politics. (There is no evidence that Mr. Biden has withheld federal emergency relief for political purposes, though Mr. Trump often threatened to use a similar tactic when he was in the White House.)

Mr. DeSantis also spent months assailing federal public health guidance about the pandemic. In August, he denigrated Dr. Anthony S. Fauci days after the doctor announced that he would retire as director of the National Institute of Allergy and Infectious Diseases.

''Someone needs to grab that little elf and chuck him across the Potomac,'' Mr. DeSantis said at a rally in Orlando.

And two weeks ago, Mr. DeSantis flew two planes filled with undocumented Venezuelan immigrants from Texas to Martha's Vineyard, Mass., in an attempt to highlight his opposition to Mr. Biden's immigration policy.

''The biggest stunt was Biden coming in as president and reversing Trump's policies,'' Mr. DeSantis told reporters in Florida days later. He also suggested that the next plane of immigrants might land in Delaware, near the president's weekend home.

Democrats were infuriated. Mr. Biden said Mr. DeSantis was ''playing politics with human beings, using them as props,'' adding: ''What they're doing is simply wrong. It's un-American. It's reckless.'' Asked days later what his response was to Mr. DeSantis's threat to send the next plane to Delaware, Mr. Biden replied: ''He should come visit. We have a beautiful shoreline.''